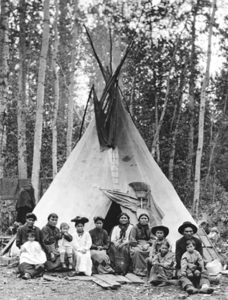 In 1977, the Treaty Land Entitlement Committee of Manitoba Inc. was formed to begin negotiations on behalf of Manitoba First Nations to settle outstanding TLE’s with Canada.

It is important to note that the province of Manitoba was not involved in the negotiation of Treaties, or in the initial allocation of lands after the Treaties were signed. From the time Manitoba entered Confederation in 1870, the federal government retained control over unallocated Crown lands in the province, along with other natural resources. The Manitoba Natural Resources Transfer Agreement (MNRTA) of 1930, which formed part of the Constitution Act 1930, transferred control and administration of these resources and lands to Manitoba, but required the province to provide Canada with sufficient unoccupied Crown land to fulfill outstanding TLE obligations to Manitoba First Nations.

In 1983, Canada, Manitoba and the TLE Committee began negotiations. A draft agreement in principle, covering 23 First Nations, provided for 640,000 acres of land and about $40 million to be distributed to the affected First Nations. However, the three parties did not finalize the agreement.

In October 1993, a protocol containing rules for negotiations was signed by the TLE Committee, Canada and Manitoba. At the time, the TLE Committee represented 22 First Nations, but only 19 had their TLE claims validated by Canada.

On June 21, 1996, an Agreement in Principle was signed by all parties outlining the main components of a Manitoba Treaty Land Entitlement Framework Agreement.

As set out in Article 33.02, General Responsibilities of TLE Committee, of the Manitoba Framework Agreement (MFA) on Treaty Land Entitlement, the TLEC will assist with the implementation of the MFA and each Treaty Entitlement Agreement (“TEA”) signed by TLEC’s Member Entitlement First Nations (“EFNs”), by undertaking the following: